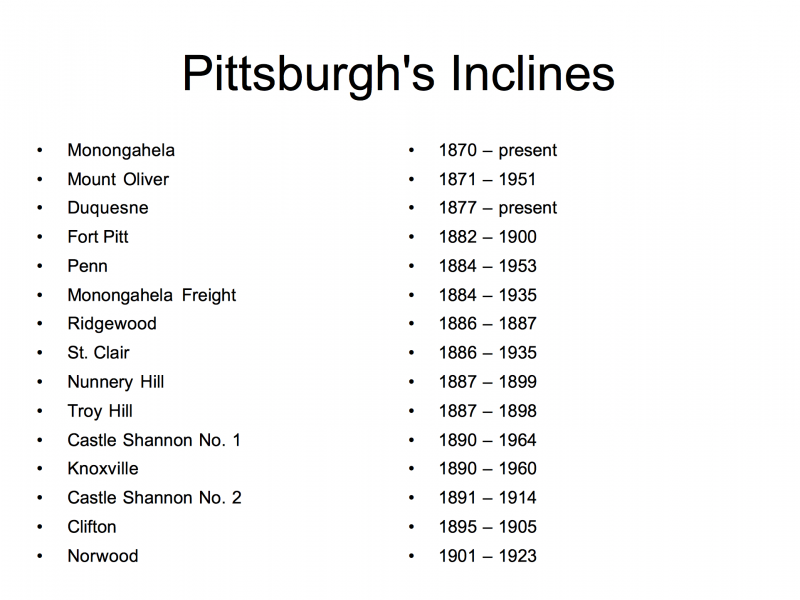 Prosperous Pittsburgh after the American Civil War had little room left for residences adjacent to its industries lining its rivers. Real estate developers had a great idea. Make Pittsburgh’s hilltops accessible using inclined railroads. Steam engines would pull a specialized car, using a cable, up one track while simultaneously letting an identical car be pulled down by gravity on another track. Between 1870, when the still existing Monongahela Incline was opened, and 1900 there was an incline building boom in Pittsburgh. No one is sure of the total number of inclines built. My new book “Pittsburgh’s Inclines” contains images of 12 Pittsburgh inclines. There were certainly more than 12 inclines in Pittsburgh but, so far, images of the others have been impossible to find.

To kick off my new blog and soon to be released book on Pittsburgh’s Inclines I want to share with you extraordinary video footage of some of our historic inclines from archives at the University of South Carolina. Jack added title cards so that you know which incline you’re riding or looking at. The title cards are mostly correct except for some typos mentioned below.

The Monongahela (passenger) Incline was not built in 1884 but was the first Pittsburgh incline built and was opened in 1870. (A view from the Monongahela Incline is shown at the beginning of the above clip.) The Monongahela Freight Incline was built next to the passenger incline in 1884 and was dismantled in 1935.